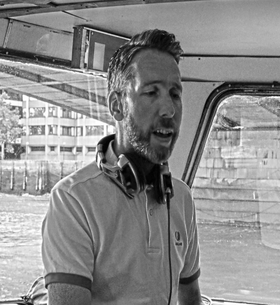 I guess I’ve always been into soulful black music. My older brothers were into a diverse range of music, but it was always the likes of Stevie Wonder, Marvin Gaye and the legendary Motown sound that stood out whenever their LPs were played in our household, and always lived inside my soul.

Being fortunate enough to grow up in West London, my teenage years found me immersing myself in the burgeoning soul scene of the time, and this is when my fascination with the art of DJing really began to take hold. I started to spin tunes at my local youth club discos and caught the buzz almost immediately!

Around the age of 19, I, along with two school friends of mine, bought the equipment we needed to do our own mobile gigs. We played mostly at friend’s parties and weddings, but we always stayed on the more soulful side of music (rare groove was the sound of the time), and had a lot of fun…  and then the house scene exploded onto our dancefloors and life would never be the same again!!

Since then I have Djed in various locations around the world, including a couple of residencies in Sydney, Australia (when I lived there in the mid nineties), Mexico, Honduras and more recently Brussels, Belgium. In The U.K. I have played in many clubs and bars including the Sound Republic, Pacha, Ministry Of Sound and Proud (O2) in London, plus clubs in Manchester, Bristol and Birmingham plus promoting and residing at the legendary MYSTIQUE parties in London during the late 90s.

In May 2015 I had the honour and privilege of being invited to play a set at the Southport Weekender in Minehead, fulfilling a long held ambition after being a regular worshiper at this event since 1991!

My main style of DJing set is soulful and deep house music, but my love of all things soulful and funky runs deep, as you will hear when you tune into my weekly show “The Soulganic Sunday Session” every Sunday night between 20.00 – 22.00 GMT on www.housefm.net