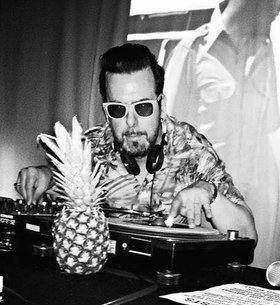 Richio is one of london’s finest vintage vinyl DJs, a seasoned vetaran of 35 years. At the age of 50, he continues to play full time as a DJ although he has been involved in house, hip hop & reggae. Richio is presently concentrating on 2 sets he can supply. One being a party set of soul, funk, disco, rare groove, Jazz-funk, classic cool, retro pop and balearic. The other set is his legendary Hawaiian Bop set of strictly 50’s & 60’s Rock n roll, soul n Motown, vintage ska, funk & latin all played on 7 inch vinyl. This included classics such as as Elvis & the Beatles as well as the rare & obscure.

If your looking for Beyonce & Beiber Richio is your not your man! But believe us when it comes to Retro Classics he is the man!

A brief history on Richio, he started out on the dance floors  in northern soul clubs of the north of England, moved onto the Dex of the Jazz dance & Jazz-funk  scene, came to London in ’87 & of course discovered house music as well as rare groove.

He played on pirate radio and was heavily involved in Southport Weekender where  by 1990 had his own techno room, and around ’93 was resident at Club UK. By ’95, he moved into the back room & bar scene and played at legendary events such as Malibu Stacey and had monthly back room residency at Ministry of Sound playing anything but a house set.

Richio was resident in some of London’s most cool boutique hotels spinning soul, funk, hip hop, disco and balearic. He has also spun at celebrity parties & fashion shows. Around 2005, he hosted a popular Old Skool hip hop event called HIP POP around this time he collected RUN DMC memorabilia and did an exhibition and sale in an Adidas store.

He also released a couple of massive mash up 12 inch vinyl and 3 hawaiian Bop edit 45s.

By 2008, his new event was the popular version excursion held at places such as East Village and Ronnie Scott’s. Guest DJs included Ashley Beedle, Stuart Patterson, Andy Smith and Kay Suzuki, he released 3 7inch vinyl edits on this label.

In 2010, Richio launched was has become his a very in demand edit label Mellow Mellow Right On, and has released 9 45s focusing on chilled rare groove, modern soul, jazz and funk. He also has hosted mellow events at various venues played the set in Japan & ibiza.

Finally to the present day, for the past 4 years Richio has concentrated on his biggest event to date Hawaiian Bop a full on party of 50’s & 60’s music, montly at the amazing Bussey Building in Peckham and also at Barrio Shoreditch and Barrio in Brixton. Bands have included The Top Cats & The Trojans and guest DJs such as Keb Darge, Andy Smith, Jazzman Gerald, Eddie Pillar, Winston Smith and Dr Bob Jones.