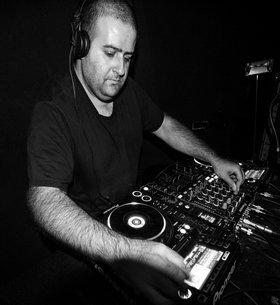 Born in Barcelona during the 80’s generation. His interest towards music began with the Valencian sounds and influences (late 80’s and early 90’s). A year after a suggestive visit to Club BCM located in Majorca, he started his precocious career in Badalona’s pub called Zentral (1996, at 21 years old). At this point, he was absolutely involved in the exciting night life and club culture.

In his late teens, he visited diverse places in Barcelona and Badalona, in which he organized his well-known parties called ‘FREE HOUSE STYLE’.

Miguel has traveled across the whole of Spain carrying and playing his creative sound in different cities, clubs, festivals and private parties. Moreover, he has taken part in the ‘Summer Loock’ of Taunusstein’s city – Germany. Teatro club – Caracas Venezuela, Cultural Shift – UK.

He has collaborated with different musical groups and organizations, even entertaining some lecturers’ discussion. It is important to remark his appearances in the media, such as in the nightly radio FLAIX FM’s show ‘Swing Flash’ where he offered a set of one hour and a half of duration listened in the whole Catalonia. He has appeared in the channel 25TV of the television and certainly in the national magazine DJ 1.

He has acquired skills and experience through the years. He mixes different styles in every session which makes him a very dynamic deejay. He has created his own style as a ‘mixer’, emphasizing his musical selection and public connection. He is able to inject the party in your veins, and of course feel the dance music. His sessions are composed by very carefully searched topics with fresh sounds in constant evolution and low groove sounds. He has the power to make you feel free and happy!

La Macarena, Catwalk, Pacha Ibiza, City Hall, Over the club, Lekasbah,Café Noir, Mochima Beach, Jam Dis Club, Sweet dance club, rosebud, atlantic club …..those are some of the clubs where he has been playing recently.