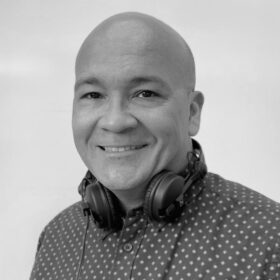 Steve made his mark as a radio presenter when he was hired by London radio station Kiss 100 as Weekend Breakfast Presenter. During this time Steve would cover several specialist soulful and funky house programs including programs for Bobby & Steve and Steve Jackson. His DJ progression in clubland was remarkable playing at all key clubs in and around London such as The Satellite, Garage City, Peach. Steve later went on to present a daytime radio programs for Choice FM, London.

As a producer, Steve has worked on several music productions including forming a new group called The Souledz. A collaboration with Full Intention’s Jon Pearn and vocalist Kenny Thomas. Their 1st release was a cover version of David Joseph’s 80’s classic ‘You can’t hide your love’ on SuSu records. It received five star reviews in Mixmag update, was number two in the buzz chart for two weeks and single of the issue in Blues and Soul magazine, lately he has produced a remix of the club classic, Jingo, with his own flavour entitled ‘Don’t Stop The Party’.