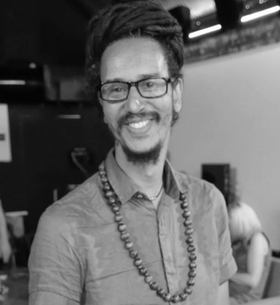 Ian is the founding member of the SOULSOLUTION SOUNDSYSTEM (Purveyors of fine funk, bespoke beats & organic afro latin grooves) known for putting on regular events at various venues across London. The Gramophone Bar in Shoreditch played host to a weekly Saturday night residency for over three years where they showcased guest DJ’s, musicians and vocalists. The night has now evolved into a monthly Saturday night residency at Lounge Brixton, South London.

As a record collector and DJ since 1991 djsoulprovyder originally started playing 70s soul jazz funk and rare groove alongside a ten piece funk band called Black 2 Basic. They ran a live music jam session for over ten years called “Spontaneous Construction”. His current sets include a selection of past and present music with a flexibility of joining the dots and crossing over many musical genres, journeying from his disco and afro latin jazz funk roots to a deep electronic tech house sound.

Ian has played at many venues across London over the years including Ronnie Scotts, Jazz Café, Koko, Sketch, Momo’s, East Village, Plan-B, Trapeze, POW to name a few as well as big festivals such as the Isle of Wight and V Festival for the award winning Barcardi B-Bar. In 2013 he had the honour of being asked to DJ at the legendary Southport Weekender (SPW) afterparty in the SunCeBeat Dome arena. 2014 had him playing at the second Love Supreme Jazz Festival in the Matua Bar with the Jazz FM DJ’s.

He became one of the resident DJ’s at the SUNSPLASH FESTIVAL in Turkey since its inception in 2009 playing alongside artists and djs such as Louie Vega, Kenny Dope, Giles Peterson, Norman Jay, Phil Asher, AtJazz, Shuya Okino, Zara McFarlene, Osunlade, and Karizma His passion for the festival which was in it’s seventh year secured him a place on the line up in Bodrum 2015 with his collective 4TOTHEFLOOR (Global House Movement) where they played alongside Andrew Ashong, Rainer Truby, Sadar Bahar and Kyodi amongst others. He was also back on the line up for 2016 at the new location of Xuma Village in Bodrum.

2016 saw more International dates for Ian, starting off in February at Celebration of Life and Friends Weekender in Brussels Belgium, and in March at Asa Baako Music Festival on Busua beach Ghana. He has a two week residency every summer at La Escollera – Ibiza Beach Club & Restaurant and is booked to play again for 2018. Bruk Boogie Kru has a regular event in Lausanne, Switzerland which invited Ian to be a guest in 2016 and again in 2018. This year he has also been booked for the Asa Baako Festival in March and the Southport Weekender Festival, Finsbury Park, London in June.

Ian has been a guest dj at a number of deep house nights over the years including Inner Rhythm, Beat Players, Soul Together and Community (Manchester’s premier house night). 2015 highlights saw him open up for two Chicago House legends, Boo Williams and Glenn Underground at Need2Soul’s bank holiday all-dayer and playing for Makin’ Moves Records event with a live performance by Tortured Soul. He was also on the line up for the House of Finery which put on the last Official Southport Weekender (SPW) Warm Up party with Groove Assassin, Ronnie Herel and Lil Stevie.

He currently has residencies at The Groucho Club in Soho, Looking Glass Cocktail Club in Shoreditch, Black & Blue Cocktail Bar in Waterloo and Lounge Bar in Brixton.

Ian is also one third of the founding members of the 4TOTHEFLOOR ‘Global House Movement’ collective which is a collaboration with EddieBoi from Jo’burg South Africa and Kengo from Tokyo Japan. They have a weekly show on Soho Radio www.sohoradiolondon.com and run a monthly residency at The Book Club called “SUNDAYSESSIONS”. The concept of the night is to feature a guest dj/producer each month. In 2015 they had the pleasure to put on such guests as Simbad, Aluku Rebels, Aroop Roy and Shuya Okino.

In 2016 they have had Klevakeys, At One, D-Malice, and T-Roy Broadcite. 2017 has seen Ziggy Funk, Henry Wu and Kyri R2 as featured guests amongst others.

All three DJ’s are originally dancers coming from a house / club / jazz dance background each one with various musical influences. In their sets you will hear elements of soul, jazz, funk, boogie, disco, latin, afro house and electronica – basically if it has a 4/4 beat they will play it. This has led them to where 4TTF is today – representing all things house, from Detroit to Chicago to Berlin to deep ancestral rhythms and South African grooves with the aim of bringing musically minded soulful people together on the dance floor. They have now evolved into a collective with the addition of the first lady of 4TTF Jay Carder who has brought her own vibe and musical stamp to the group.

Their inspiration is to develop the global house scene by putting on credible club events bringing the house dance community and the house music community together in London, the UK, Europe and beyond. In 2014 4TTF (Global House Movement) established an event called House vs Hustle which showcased Inga B and T-Boy doing the “New Hustle” partner dance for the first time in a London club environment and in 2015 they put on part 2 of House vs Hustle at the Rhythm Factory with Atjazz celebrating his birthday alongside Jonny Miller and Krystelle Morin.

They also had the pleasure to put on Boddhi Satva at the Bedroom bar which was the Official After Party for BBE Records 20th Anniversary. The 4 to the Floor Collective were also invited to play at Bestival Festival in the Isle of Wight in September 2016 and at the new location in 2017. They were invited to promote and dj at the 20th anniversary celebrations (20YA) for Atjazz Record Company. BBE Music had also booked them for their newly opened bar, restaurant and record store’s NYE party at the Institute of Light in 2016 and 2017.

They began 2017 putting on four bigger events with an all-day festival called LOVEDANCE with Paul Trouble Anderson and whilst their monthly SundaySessions continues to grow in April saw the collective put on an event with BBE Music to celebrate Record Store Day with the high priest of Yoruba Soul, Osunlade and the godfather of Ancestral Soul, Boddhi Satva. In September they collaborated with Tribal Soul to put on a night with Djeff from Portugal and then in November with R2 Records, Makin’ Moves and Touchin’ Base to put on Alton Miller from Detroit.